As you can imagine, making underwater housings for cameras is hard! Thankfully, there are quite a few dedicated companies out there which are doing all of that hard work for us, so that we can concentrate on taking awesome photos underwater. NiMAR is one of those companies. NiMAR is a leading Italian underwater housing manufacturer, which has been around since 1984!

Since the 80’s, NiMAR have been through a lot. They started out in the field of plastics, but their passion for underwater photography quickly led them to become one of the leading manufacturers in the field. 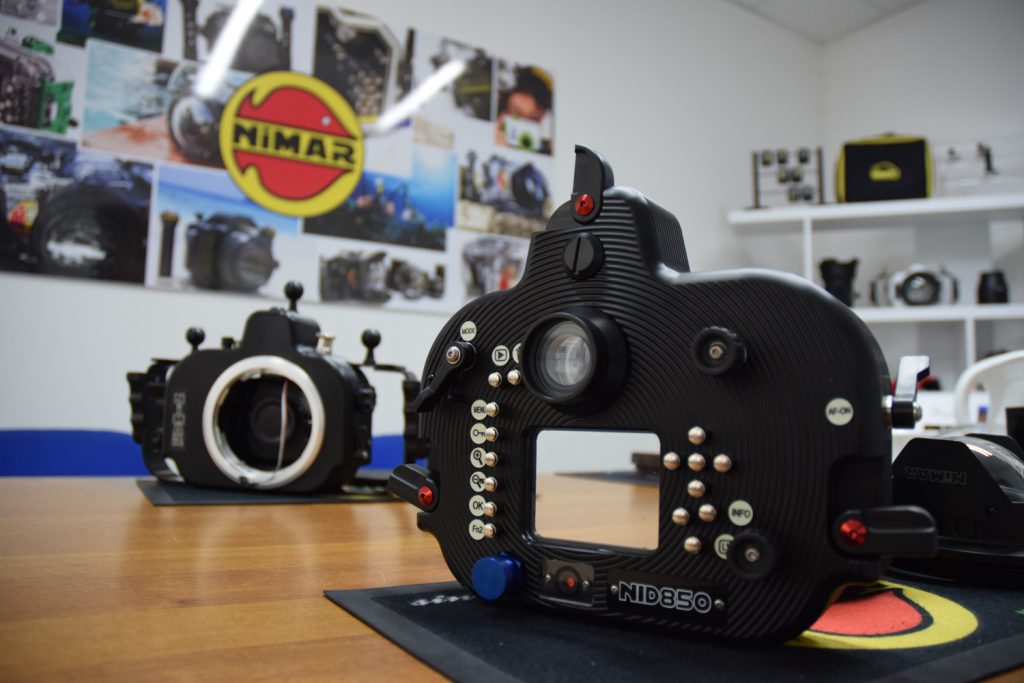 Throughout the years they have produced housings for nearly every type of camera in the market, ranging from giant video cameras, to film SLR’s, action cameras, compacts, DSLR’s and in recent years mirrorless as well.

About 10 years ago, NiMAR went through a rough patch, where many issues were reported and some negative reviews can still be found online, but rest assured that since those days they have changed management, revamped their entire production process and their products today are very reliable and we’ve been getting excellent feedback from users!

Last week we were lucky enough to get a private tour at their factory, in a little town called Magreta, Italy. Aside from the amazing pasta served pretty much everywhere, we were very impressed with the efficiency of their manufacturing process, and how they make it look easy, almost like making pizza!

Did you know that what we know as Ravioli is actually called Tortelli in Italy?

Upon arrival, we received a warm welcome from Cristian, NiMAR’s CEO and Roberto, chief engineer and designer. With glittering eyes, they started by telling us all about their new PRO line of housings, made out of delrin. If you’re not familiar with delrin yet, you should. It’s awesome. This is my favorite definition: “Delrin® is an acetal homopolymer with an excellent balance of properties that bridges the gap between metal and plastic.” Basically, it’s a really strong material that feels almost like metal, but costs almost like polycarbonate. These features make it ideal for underwater housings.

Delrin® is an acetal homopolymer with an excellent balance of properties that bridges the gap between metal and plastic.

We’ll talk about the new Pro housings a bit more in a moment.

The Pro housings are only the latest addition to the 2 existing lines of underwater housings – the NiMAR standard and the NiMAR Water Sports (Surf) lines.

The NiMAR standard housing is the most popular line. It’s best described as a high quality polycarbonate housing for DSLR cameras that doesn’t break the bank. Using innovative engineering techniques, NiMAR have managed to support almost every Canon / Nikon DSLR camera in the market, including older models which no other manufacturer has housings still available for. Still hanging on to your trusty Nikon D50 and want to play with it underwater? No problem! Can’t get enough of your Canon Rebel XT (350D), NiMAR’s got you covered!

More importantly, all new Canon / Nikon DSLR’s are supported, with a wide range of port and zoom gears available for both. In addition, NiMAR support the leading mirrorless models by Sony, Olympus and Panasonic, such as the Sony A6500, Panasonic GH5 and Olympus E-M1 Mark II.

The NiMAR main line (N3D) is the go-to housing for most scuba divers looking to take their DSLR underwater, without breaking the bank. Virtually all necessary buttons and dials are supported, for full functionality of the camera underwater. NiMAR recently made a change in their design, moving from the clear polycarbonate to a sleek white exterior, but maintaining the transparent back so everything is still visible from the outside.

The NiMAR housings are depth-rated down to 60m / 200ft, more than enough for the average recreational diver and UW photographer. They are sold with detachable grips, for mounting strobes and lights and come in a neat padded bag.

A variety of different flat and dome ports are available to support most relevant lenses from leading brands – Canon, Nikon, Sigma, Tamron and Tokina. Currently these housings are supported by fixed ports, which are each designed specifically for a certain lens and come bundled with a zoom gear if needed. Our sources at NiMAR tell us that this lens system may soon be replaced with an extension-based port system, which is more modular and allow you to use different lenses under the same port with different extensions.

The ports are easy to replace and lock into place with a simple bayonet system – push and twist. All flat ports now come with a 67mm thread to attach external diopters and for zoom lenses a knob is located on the left side of the port to control the zoom underwater.

All housings include a leak detector with a blinking LED and beeping alarm to indicate any moisture starting to build up inside the housing. The back of the housing is sealed by a single o-ring and locked with 4 metal latches firmly in place.

One of the unique features of these housings, which separate them from other polycarbonate alternatives, is the availability of fiber optics on many of the DSLR housings. For the models that allow popping up the built-in flash, two standard S&S type connectors are included that allow you to trigger strobes via fiber optic cables. Since optically triggered strobes are often more affordable than those which included a sync cord connection, this reduces the overall cost (and size) of your entire system.

Speaking of size and weight, the average weight of this housing empty, before ports is about 5.3lb (2.4kg). Buoyancy is slightly positive but may vary according to the lens and port you are currently using.

Read my full review on the NiMAR D500 housing here. Even though NiMAR no longer make this type of housing for the D500 (it’s part of the PRO series now!), this is a great reference on similar housings in this series.

Not everyone need a full blown DSLR housing with all the bells and whistles. Some photographers simply need to waterproof their camera on a budget, without compromising on quality and reliability.

The NiMAR Water Sports line is designed mainly for surf photographers, offering 3 different housings (Classic, Base, Pro) which differ mainly in controls and grip. The Base and Pro models feature a nifty pistol grip, perfect for handling in rough surf, while still nailing the shot with the shutter release conveniently located on the pistol handle. The Classic model features the same side grip we know from the standard housings.

Since plenty of photographers don’t really need full controls over their cameras while shooting surf and action photos, NiMAR managed to lower the price significantly on the Base model by omitting most of the controls and leaving only the shutter release button available.

The pistol grip is a two-button type, with one button for focus and the other for shooting, allowing you to capture the action without missing focus.

The Water Sports housings use the same port system, but with slightly different ports which are adapted specifically to these housings. These are denoted by WS in the part number.

NiMAR offers the Water Sports housing for select Canon and Nikon DSLR’s, as well as several mirrorless cameras which are highly popular among surf photographers and videographers, such as the Panasonic GH5, Sony A6500 and Olympus E-M1 Mark II.

The underwater housing market is usually divided to the higher-end aluminum housings, and the more affordable polycarbonate housings. NiMAR recently released the new PRO line of housings, disrupting the industry with a new type of housing made out of Delrin. Delrin is also known as Acetal Resin and it’s a very tough material which bridges the gap between plastic and metal.

NiMAR managed to produce a high-end professional grade housing for about the same price tag as other polycarbonate housings in the market. That’s impressive!

Each housing includes a dedicated hole for performing a pre-dive vacuum check. A gauge and pump are optional and sold separately. The test is performed by connecting the gauge to the hole in the housing, pumping out the air to get a certain pressure built up inside the housing, then waiting for 30 min to see if the pressure holds. If it does, your housing is sealed properly and ready to dive!

The NiMAR PRO housings ship by default with a Nauticam-type mounting ring for ports. Their new port system uses the same mount. However, a cool feature is that the port mounting ring can actually be replaced, so you could order yours with an Aquatica, Ikelite, Sea&Sea, Seacam, Subal or NiMAR ring mounts. That’s really helpful if you’re still carrying ports for your previous setup and don’t want them to go to waste.

The camera mounts on a little plate, which screws into the camera’s tripod mount, and allows opening the battery compartment and changing batteries without removing the tray. The camera slides smoothly into place and lock inside to prevent any movement. The back side of the housing locks easily in place with two latches on the sides of the housing.

NiMAR have been around for a long time. They are well known in Europe and are steadily gaining popularity in North America. They’ve done a great job as a company and we are proud to sell their products. They offer great, reliable and affordable underwater housings, for dozens of DSLR and mirrorless models, which serve as fantastic imaging tools for divers and surf photographers worldwide to create stunning photos and videos of the underwater world.

We encourage you to inquire about a NiMAR housing for your camera! We are always here to help you with advice, regarding ports, accessories, or simply choosing the best housing for your needs.

Dive safe and mind your fins!