A staple lens for Canon macro shooters, the Canon EF 100mm 2.8L has been an excellent part of my kit (and most of those who shoot Canon interchangeable systems underwater) for years.

So, when Canon announced an RF version of the 100mm macro, and teased some of the specs, we were itching to put it through its paces.

Most notably, the RF version promises 1.4x magnification, even greater than the 1x of the EF mount version, and improved image stabilization. For underwater macro shooters hoping to squeeze every last pixel of detail out of close-up critters, this is fantastic news.

The RF 100 2.8 also includes a new feature that generated some buzz in the lens world – so called, “spherical aberration control.”

Essentially, this feature allows you to control some of the characteristics of the Bokeh (or, background blur) of the image, without changing the aperture.

This is a really interesting, albeit niche, feature. As a spoiler–I did not find the S.A control particularly useful for what I do. But hey, it’s there if you want it!

We’re currently testing gear as of this writing in Monterey, California, so part 2 will be added when we’ve finished. Stay tuned!

This article will first cover my initial impressions after using the Canon RF 100 2.8L, coming from the EF 100 2.8L.

But using this lens also reminds me of the first time I picked up the Canon EOS R5, and how it compared to the (rough) DSLR equivalent, the Canon 5D Mark IV.

The Canon 5D IV had three issues I didn’t love while I was shooting it from 2018-2020 – one, it didn’t have an articulating screen; two, it didn’t have any in-body image stabilization; and three, it was a little slower shooting than I wanted (I think about 7fps).

When the R5 came out, it immediately solved all three of my issues with the 5DIV, and threw in some bonuses like increased resolution, 4k120, 8k, etc.

The result is an absolute joy of a lens to shoot: tack sharp, beautiful bokeh, and relatively light and portable as well. The following test images are all uncropped files from the R5 and the RF 100 2.8L. 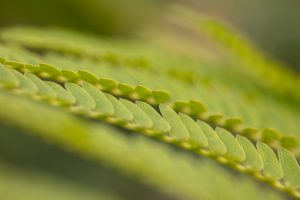 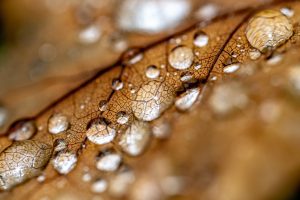 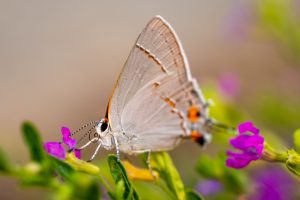 Straight out of the camera, something about this lens feels just right.

At 1.4x magnification, the RF 100 2.8L is one of few macro lenses I am aware of that delivers a greater than 1:1 reproduction ratio, without any additional extension tubes or diopters, and autofocuses.

The difference between 1.4x vs 1.0x was very noticeable to me in the real world, and I was blown away by the level of detail in the files from the R5 and the RF 100 2.8 combination. According to Canon, the closest focusing distance of this lens is 10.2″ / 26 cm.

This means that this lens can focus on subjects somewhere around 4″ from the front element – close focusing distance is measured from the image sensor, not the front of the lens.

The following test shots are uncropped, near the closest-focusing distance of this lens. 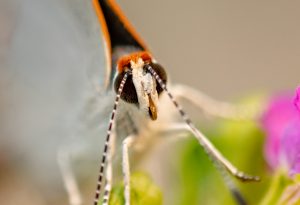 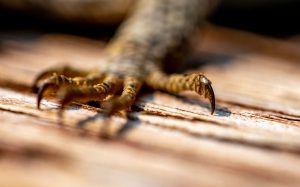 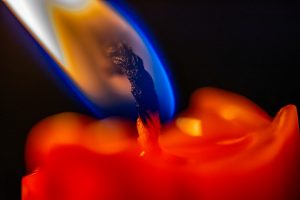 Some macro lenses, by the nature of their focal length and maximum aperture, also double as portrait lenses. In my opinion, the Canon RF 100 2.8 excels in this department, as it renders out of focus areas beautifully.

It’s relatively bright 2.8 aperture obviously helps in this regard, but I was more impressed by the more intangible aspects of this lens. Check out some of the samples at the end of this section (and remember, I’m an underwater photographer, not a portrait photographer…) 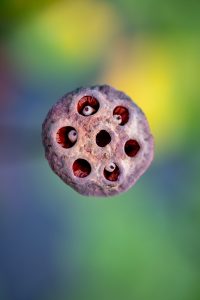 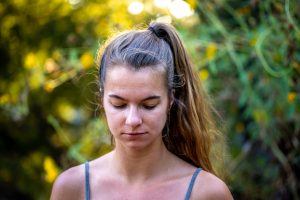 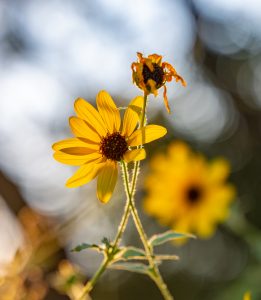 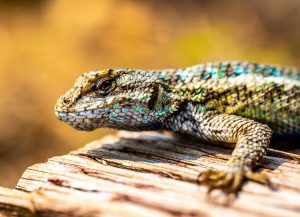 Essentially, the RF 100 2.8L has a control ring designed to allow for the adjustment of the strength and character of out-of-focus regions. The S.A. stands for “Spherical Aberration.”

This, on paper, is an incredibly cool feature. It’s pretty technical, and there are other reviews out there that go into the mechanics of how Canon designed this if you’re interested. But, essentially, the goal is to control the look of the background Bokeh, in-camera, without changing any settings. Sounds great!

However, from my experience, this feature still has some kinks to be ironed out, or just really caters to the more soft-focus crowd. I don’t do much soft focus, I like my focus to be quite the opposite.

I did experiment with many different shots at each level of S.A to get a feel for it though, and noticed a few things.

First – when you change the S.A. dial, the focal length changes somewhat. Or, at least, there is some level of magnification happening, so that as you toggle through a series of photos shot on a tripod, with nothing changing except the S.A. ring, the image zooms in and out.

This is interesting, and something to think about if you are trying to focus stack or some other post-process while using this feature.

Second, and more important – as you move in either direction from “0”, there is noticeable distortion in the in-focus areas of the photo. Yes, the background characteristics are changing more than the foreground, but everything is affected to some degree.

For me, the soft-focus is a deal-breaker. In fact, when I tool the first few photos with this lens, I accidentally bumped the S.A. ring all the way over, and I thought I had received a bad copy. I realized what was going on eventually, and made sure to keep the S.A. control set to “0” after I had fiddled around for a while.

I do think there are some folks who will use this feature as it is–especially those working for clients who are going for a specific artistic style.

But for me, I keep the S.A. ring locked at zero (and I am glad Canon included a lock, so I don’t make the same mistake twice.)

I will preface this section with a brief anecdote. I was in Papua New Guinea photographing insects in the jungle with a Canon 5DIV and the EF 100 2.8L in 2018, and I have a few memories of absolute frustration when my speedlight ran out of juice and I couldn’t get clean shots of a pretty cool critter on the underside of a leaf with natural light.

Now check out the following photograph of my sister, last night: 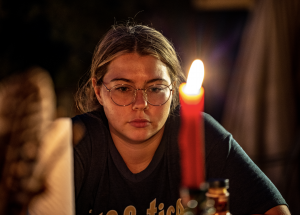 Certainly nothing special about this shot (no offense, Micaela).

Except, that was shot with a shutter speed of about half a second.

Put simply, the image stabilization on this lens when paired with the Canon R5 is fantastic, and absolutely results in shots that would have been missed with my 5DIV and EF 100 2.8L combination.

Aren’t you an Underwater Camera Store?

This is a good point…and fear not, we will continue this review with a report on the performance of the RF 100 2.8L in a more aqueous environment. It’s worth thoroughly familiarizing yourself with new gear on land before descending into the deep blue depths, though!

We’re currently putting the RF 100 2.8L through its paces, and first got it wet just this afternoon–we will continue to add to this post.

We’re using it in a Nauticam R5 housing paired with a Nauticam Flip Holder and SMC-1, and, after just part of one dive, we’ve been very impressed.

This lens combination is still quite new to the market – especially given the pace at which underwater equipment moves compared to other products – Nauticam only recently confirmed the correct port combination for it. If you’re wondering, it is Macro Port 94.

We’ve put the RF 100mm 2.8L through a few dives this week in Monterey Bay, California, paired with a Canon R5 in a Nauticam housing.

When paired with the Nauticam SMC-1 which offers the flexibility to get even closer, any and all macro subjects, from medium sized fish to tiny nudibranchs, are easily captured in terrific detail. See the following sample images: 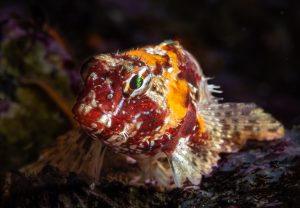 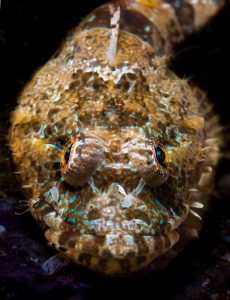 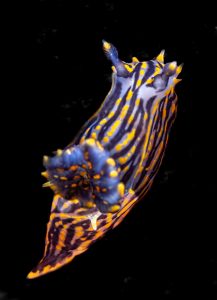 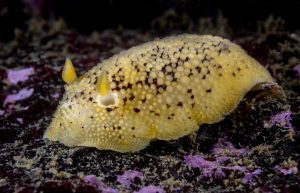 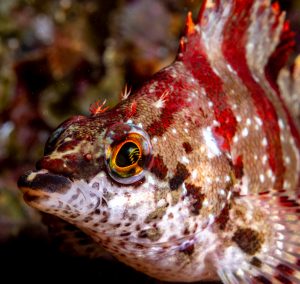 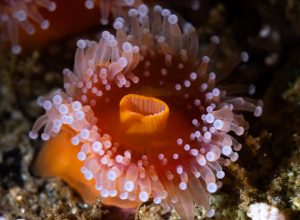 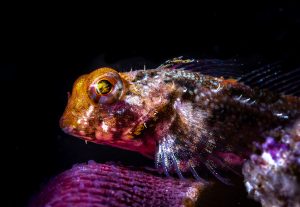 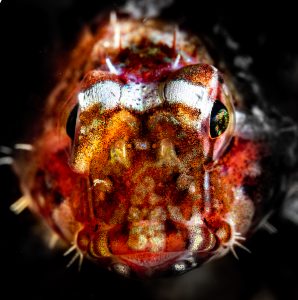 One thing to note is the switch on the lens side of the camera plate (the plate that secures to the camera into place inside the housing) has two positions — one for EF lenses and one for RF lenses. For RF lenses like this macro lens, the camera plate toggle needs to be in the “down” position. Hopefully this is intuitive with the lens in hand. 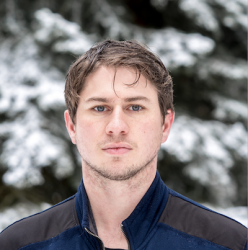 Morgan Bennett-Smith
Morgan Bennett-Smith is a field research scientist and photographer. He completed his B.A. in marine science at Occidental College in Southern California, and his Master’s Degree in marine science at the Red Sea Research Center in Thuwal, Saudi Arabia, where he studied coral reef symbiosis. Along the way, his photographs have won numerous international competitions and been featured by organizations such as Smithsonian, the Guardian, and Nature, and been commercially licensed over 3,000 times.