I’ve wanted to experience Mexico for years. My plan was always to travel through the entire country, diving where I could. But when I actually arrived in Mexico, I realized I could only realistically see a small part of this beautiful region.

But what I saw…wow. What I saw was truly amazing. I went to Tulum, Playa del Carmen, Holbox, Isla Mujeres and Cozumel. I went to parks and beaches, and of course, I went diving! Here is a little about my traveling and experiences and seven reasons why diving in Mexico is amazing. 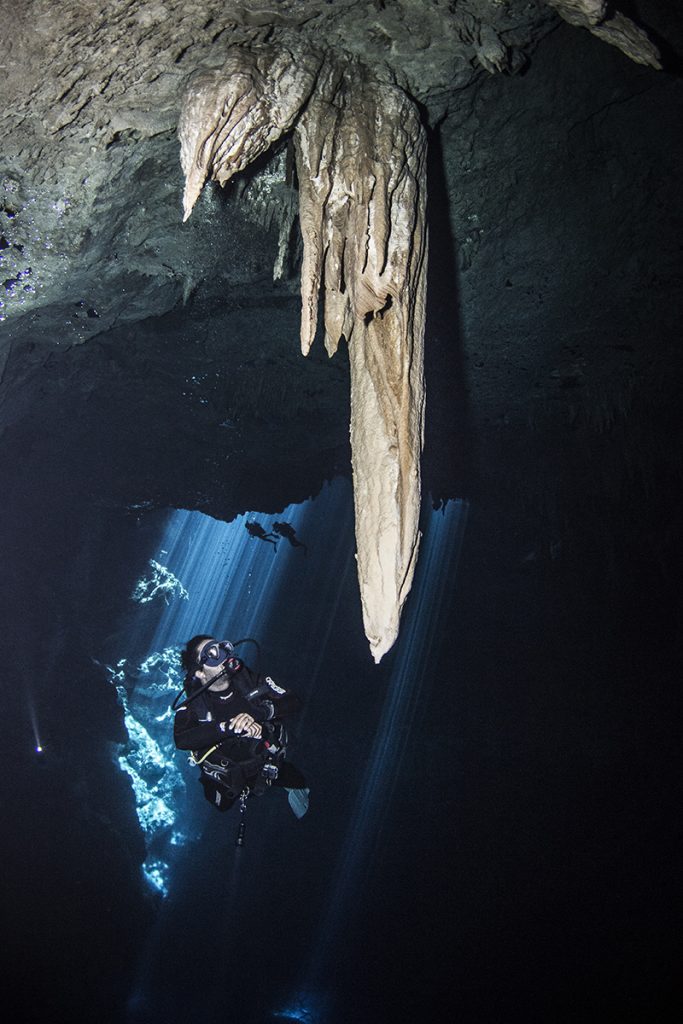 The wonders of Cenote diving!

1. Diving in the cenotes of Yucatan

I started my trip in Tulum, so my first dives were, of course, in the cenotes. There are many cenotes, so it was hard to just choose one. So, we decided to take the convenient route. Because we were with some no-diver friends, we headed to the “Dos Ojos Park”. It was also near Tulum, so really easy to get to. This park has a few cenotes, but we chose two: “The Pit” and “Dos Ojos”.

“The Pit” is a deep dive, around 35 meters deep (around 115 feet), with amazing clear water. One cool feature of The Pit is that you can see the point where freshwater and saltwater meet, a layer of differing densities. One thing to take into account is that at this point everything looks blurry because of the way the light refracts in the two different waters, so your pictures may appear out of focus.

I couldn’t believe my eyes diving this site. You won’t see any marine life, but the rock formations are really something. You can see stalactites hanging from the ceiling of the rock, and stalagmites emerging upwards. The most incredible feature of this cenote was the light beam that lit up the deep cavern—it was just breathtaking. The narrow opening lets streaks of light into the pit cenote and the crystal clear waters let the light reach all the way to the bottom, nearly 40 meters (around 130 feet). So, I recommend going diving on a sunny day.

Next, we went to the second cenote, “Dos Ojos”. This one was a shallow dive, around 10 mt (around 33 feet) maximum. The name “Dos Ojos” means “Two eyes”, because of two sinkholes linked by a passage in between. We followed a line that is clearly marked so you can find your way, and as you pass through, you enter different caves. Close to the end, we reached a bat cave, and when we surfaced, we saw all these little guys hanging from the ceiling. This dive had many interesting rock formations along the way, and is a perfect dive for beginner divers. The only challenge is that you must continuously check your trim. 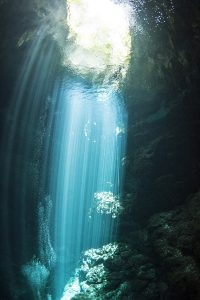 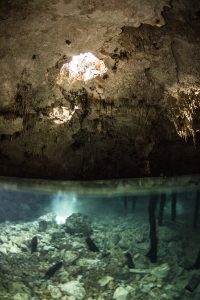 Known as the Mesoamerican Barrier Reef System or as the Great Mayan Reef, one of Mexico’s coral reef systems covers a huge region over 1000 km, stretching into other countries like Belize, Guatemala and Honduras. Part of this reef in Cozumel is a protected marine area, full of life. Diving here I could spot huge lobsters, turtles and conchs, which are aggressively hunted in other places. It was really nice to see so many of these creatures on only one dive. 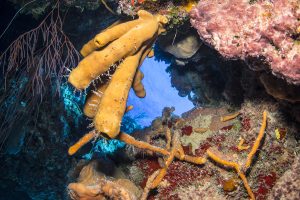 A glimpse of the Mesoamerican Barrier Reef System.

I went crazy with the visibility in this region. I could look down and see to around 40 meters deep. You could see the color changes from the boat. It was like being in a movie. And taking pictures in this kind of water… “wow”, is all I can say. 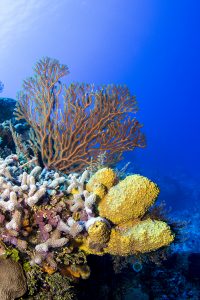 Some of the many corals in Cozumel.

As I mentioned, part of Cozumel is a protected area. The “Arrecifes de Cozumel National Park” encompasses the reefs on the south side of the island, called “Punta Sur” and also covers a little part of the east side.

The park started in 1996 and its size is 120 square km. The park takes care of different projects, protecting the marine areas from different threats. Talking with the people, I learned that the only boats that can take you diving, snorkeling or just for a tour over the national park have to be authorized boats. These boats pay a license fee each year to be part of the park, contributing to conservation efforts. Before you take any tour, ask the operator if they are licensed to go—this way you help maintain the protection of the park.

Thanks to the protected area programs, sea turtle populations have grown and are frequent visitors to the areas reefs.

I recommend diving Santa Rosa and Colombia Wall. These two dive sites in Cozumel where by far my favorites. I particularly enjoyed the current, all of our dives were drift dives. You can relax, float with the current, and enjoy the amazing views! Kind of lazy dive. Also, it’s really nice going through the impressive caves and tunnels filled with coral and sponges. 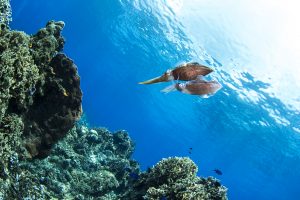 For example, one species I met was the toadfish. Cozumel is known for the blue and white striped splendid toadfish with its yellow fins, an amazing fish. I am not sure if I saw exactly that one, because it was hiding under a rock, but it might have been.

Also, there are so many turtles! I saw green and hawksbill turtles during my dives, but loggerheads and leatherback also come here to nest.

On land, one of the most fascinating animals that we saw was the horseshoe crab, just hanging out near the shore. These crabs are “living fossils”, meaning they have existed nearly unchanged for at least 445 million years. They were around even before the dinosaurs. Despite existing for hundreds of millions of years, horseshoe crabs are nearly identical to their ancient relatives. We saw this crab at Holbox beach, while we were just walking and enjoying the sunset. 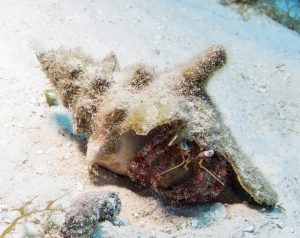 This was, without a doubt, one of the highlights of my trip. I had always wanted to go diving with a whale shark. Here diving was not an option, but snorkeling with them was!

I have to say, the time I was in the water with this incredible creature was amazing, but the whole tour was a little bit too much.

Maybe it was like that for me because we went when the whale shark season (May to September) was almost over, so there was only one whale shark around us. If you go when there are like 100 whale sharks, your experience is probably going to be even better than mine. But still, we swam with one huge whale shark, and it was unbelievable.

Seeing this great fish (because yes, the whale shark is not a whale, but rather the largest species of fish in the world) just next to you, feeling how it moves in the water next to you, and how it looks like it is going slow, but you cannot keep up with it, all of this is just amazing. So, yes, go, but try to go in the middle of the season. In this way, you won‘t be a part of the craziness of the chase to swim with them.

And, of course, only go with the authorized local companies. In my case, I went from Isla Mujeres, but you can go through Holbox, Playa del Carmen, Cozumel or Cancun, the only difference is the price and how far you travel.

Usually, you have around a 10-minute swim next to the whale shark. In my boat, we were 8 people, and we all took turns in the water with the whale shark so that it was never too crowded.

7. Amazing parks that you can visit with your non-diver friends

Often, as was the case for me, your dive trip may include non-diving friends along on the journey. This can be unfortunate for your companions if diving is the only thing to do.

But, in the Riviera Maya, this doesn’t matter! If you go to the cenotes, there are also spots where non-divers can go just for a swim, for example “Dos Ojos Park”. Or, you can go to any of the ruins scattered all over the Riviera Maya; I recommend Tulum and Coba, and, of course, Chichen Itza is also great.

Your friends can also see many of the same vibrant marine species from the surface, snorkeling with turtles and corals in Siaan Kan National Park, or watching dolphins, birds and crocodiles from the boat (although we only saw a little crocodile head hiding in the mangroves).

And, of course, everyone can just enjoy a nice day at the beach. 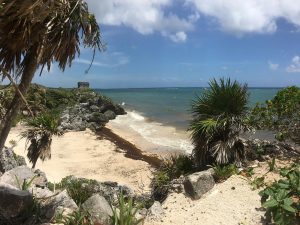 Lastly, I just wanted to write a little bit about an amazing organization we went diving with in Mexico. Wheel the world is a company that is opening previously inaccessible destinations to be wheelchair friendly, like Machu Picchu, Chichen Itza and Torres del Paine. In our case, we went diving in Cozumel together with a group from Wheel the World and had a great experience. We joined them and saw first-hand how eye opening diving can be for someone who is unable to walk. There were two guys in the group that were in wheelchairs, and one of the instructors (Leo) was missing a leg. You could see how easy Leo made everything look.

A big hand to these guys that are making huge changes for the next people to come, and making me love what I do even more. 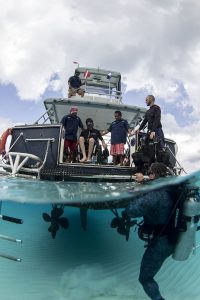 With the team of “Wheel the World” preparing for a dive. 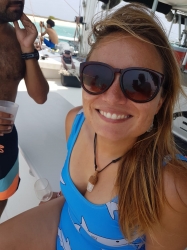 Carolina Marcías
Travel Blogger at Girl Dives The World
I’m Caro, and I live in Curaçao, but I am originally from Santiago, Chile. I started diving in 2008, and since then, I have never stopped. I am an underwater photographer and a Scuba Dive Instructor. I started taking pictures when I realized my friends could not understand why I was always underwater, or what I was seeing. So I decided, with a basic underwater camera, to take some pictures and show them. Since that day, I have been taking pictures in different countries and each day, falling in love with this amazing passion.