This week we will feature the talented Richard Barnden! 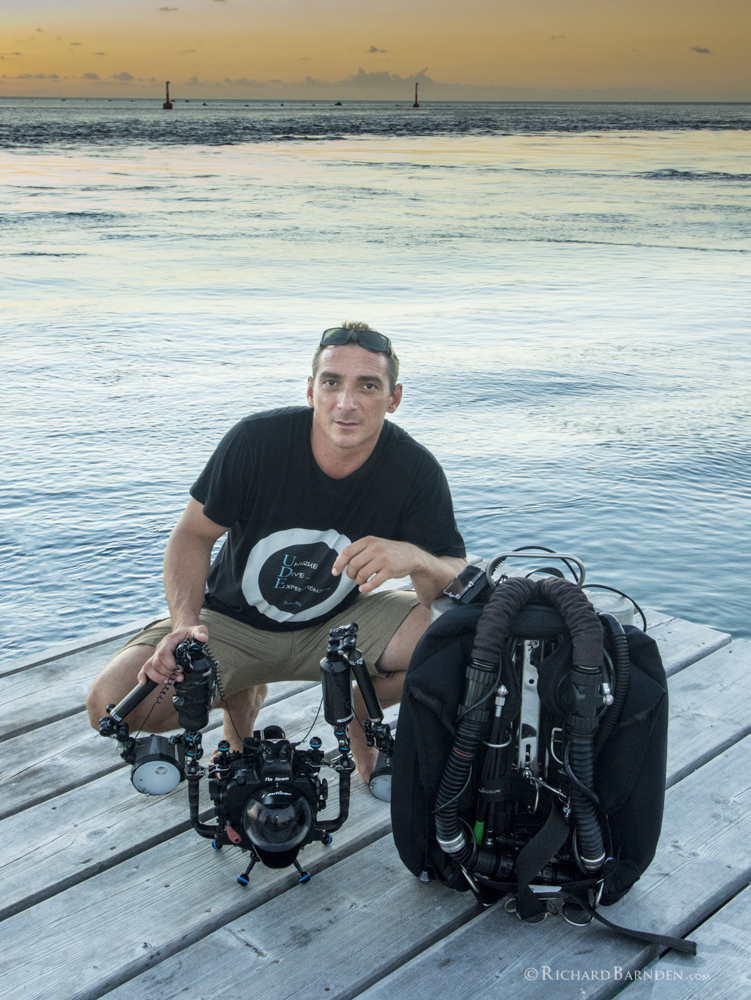 Richard Barnden has been guiding underwater in Palau for nearly fifteen years. His passion is in unique underwater imagery, specializing in spawning aggregations and black water night diving. He has spent more than ten years researching spawning aggregations and their predictabilities, returning to Palau every six months to continue unravelling some more of their hidden formulas. In 2012 Richard and Paul Collins co-founded Unique Dive Expeditions, a product of Sam’s Tours which was the first of its kind educational diving product targeting spawning events for recreational scuba divers. These spawning events are tailored around lunar phases to observe fish reproduction mainly during the early hours of the morning. By night Richard spends most of his time drifting in the middle of the pacific ocean photographing blackwater diving.
Most recently Richard, Paul and their Unique Dive Expedition team were the pioneer dive team to crack the spawning timing of the Camouflaged grouper (Epinephelus polyphekadion) in Palau, something that took them almost seven years. Three years later, In 2018 Richard and Paul put together a team of JJ-CCR closed circuit rebreather divers to try and uncover some of the similarities and differences between the same species of grouper spawning in Fakarava, French Polynesia and Ulong Channel, Palau. Although primarily there to document the grouper spawning Richard and Paul were also in Fakarava to observe the shark hunting behaviour that Laurent Ballesta and his team had discovered a few years before. This expedition led Richard on to winning Underwater Photographer of The Year and British Underwater Photographer of The Year 2019 with his shot entitled ‘The Gauntlet’ of two grey reef sharks tearing apart a terrified parrotfish at night.

Born in 1978 I grew up near the coast of South East England where I was always drawn to the ocean. In 2001 I set out for an adventure in Fiji that would change my life forever. Spending the next six months learning to dive and how to identify different species of fish, I worked for a non profit organization setting up marine protected area’s around one of the northern Fijian Islands. This would later be the building blocks for my future diving and underwater photography career.
After building up enough dives to do my PADI divemaster and later PADI instructors I set sail for Australia where I worked for one year teaching tourists how to scuba dive and guiding certified divers around The Great Barrier Reef. My passion however was in underwater photography and after traveling around South East Asia for a year I settled down in Palau in 2003 and started work on a live-aboard as a photo and Video Pro.

THE BIRTH OF UNIQUE DIVE EXPEDITIONS

After five years of filming and guiding Palau’s dive sites, I started to notice pattern’s emerging in my log books and stock photography catalog’s. Fish kept appearing in larger than normal school’s at certain dive sites around certain moon cycles and seasons. These I would later learn are spawning aggregations and I became fascinated with understanding their predictabilities. This soon turned into an obsession and I would spend hours looking for any scientific or documented material I could get my hands on in an attempt to learn more. One book which became the bible of spawning information to me was ‘Words of The Lagoon’ by Dr Johannes, a pioneering scientist in the late 70’s. Dr Johannes came to Palau and worked with local fishermen to understand spawning aggregations, something that would take a lifetime to learn without local knowledge. With the local Palauans help this would lead on to the pioneering work establishing Palau’s Bull’s. A closing period of fishing during spawning times thus protecting these vulnerable events from the every increasing pressure of overfishing. Most of these are still in force today.
Years went by reading more information and piece by piece I eventually started building a library of my own formulas and spawning events.
In 2012 myself and Paul Collins co-founded a brand new product called Unique Dive Expeditions, operated by one of the most popular dive shops in Palau, Sam’s Tours. These expeditions are based around the moon’s lunar cycles throughout the year for recreational scuba divers to witness some of mother natures hidden secrets – Spawning diving during the day and blackwater diving at night.
Since 2017 we have been leading Unique Dive Expeditions guests around some of the worlds most famous dive destinations including Palau, Galapagos Islands and French Polynesia.

Get in Touch with Richard